Do You Know Where Estonia Is?

July 23, 2015Written by Charlie and Carol
Leave a Comment

Tallinn, Estonia
Today we are visiting the country of Estonia. We don’t really know a whole lot about it and that is part of what makes it interesting. The town of Tallinn once consisted of two medieval towns, the upper called Toompea, was the seat of government and the lower was a Hanseatic trading center filled with German, Dutch, and Swedish merchants. It appears that Estonia was ruled by many different countries until it gained a short lived independence in 1920. In 1939, a 50+ year nightmare of German and Russian rule began. The Estonians declared and gained independence again in 1991.
Our walk from the port to town is pretty short, only about 15 minutes. We are doing a self guided walk that I copied from a Rick Steve’s book. We start at the Fat Margaret Tower, the main old gate into town, named because of its very thick walls. 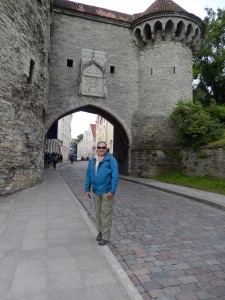 Just inside the tower are the three sisters ( now a hotel) which were Hanseatic buildings which were homes, offices and warehouses all rolled up into one. We go up Piik street, the main drag through the medieval merchants part of town. We pass St Olafs church with the tallest spire in town. The Russians used this tower to block Finnish TV signals from reaching the locals. Just up the street is the former KGB headquarters where Tallinns troublemakers were interrogated.
On this street, there is also a richly decorated door , the entrance to the Brotherhood of the Black Heads. Not what you might think, the Black Heads were formed to accommodate bachelor merchants, and were named after their patron, St Maurice from North Africa. You could not belong to the great guild in Hanseatic society if you were single as you had no ties to the community. This is why the bachelors had their own, much less powerful guild of sorts. If you married, you were automatically excepted into the Great Guild, since you now had roots in the community.

Alter–Church of the Holy Ghost

Next we go into the Church of the Holy Ghost, which dates back to the 14th century. It is a Lutheran church and was the main church of Tallinn. The interior is beautifully decorated with wood carvings and paintings. We spend some time absorbing this wonderful church. We exit the church and go down a small lane which soon opens up into the town square. The weather has cleared up and the sun shines on the buildings surrounding the square. There are market stalls where vendors are selling their wares to the tourists. The city hall fills one side and tucked in an opposite corner is the pharmacy which dates back to 1422. 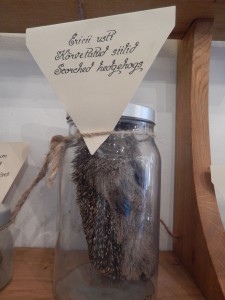 We duck into it where there are displays of some old cures in their jars such as wood louse infusion, scorched hedgehogs, and dried toad , of course.

We pass St Nicholas Church and enter the Danish Kings garden. Part of the city wall which separated the two towns is here. The wall once had 42 towers along it.
As we climb into Toompea, we come to the Alexander Nevsky Cathedral, a Russian orthodox cathedral. It was built in 1900 as an attempt to files Russian cultural muscle and remove some of the local identity. We step inside and it is very ornate. We are lucky to see a small service being performed. The small group being perched to are all women and all wearing kerchiefs on their heads. It is very interesting.
Across from the cathedral is Toompea castle, which the Russians added onto the old medieval castle in the 18th century. Behind it is Pikk Hermann or Tall Hermann Tower, the tallest tower of the old castle wall. For fifty years, the soviet flag flew on the the tower until when the Soviet Union started to unravel, the locals defiantly replaced it with their own black, white, and blue flag. After this we move on and peek into the Dome Church, a Lutheran church from the 13th century. It was rebuilt after a fire in 1684. Originally Danish, it became the wealthy Germans church in the 1600’s. It is decorated with more than one hundred coats of arms, carved by local masters, as memorial to the German deceased. We end our walk with two viewpoints overlooking the lower town and out to the sea. We run into Terje and Inger who are on a guided tour. There are many guide tours roaming the town and they basically are seeing what we saw. From the second viewpoint, we have one last quest. The search for a free toilet. It is not looking good, when I duck into a building with some artwork and discover one hidden in the corner. Oh what a relief it is! We have really enjoyed our walk and the ambience of this old town. Our self guided walking tour cost us 2 Euro which was the cost of visiting the Church of the Holy Ghost. Much better than the 50 Euro per person guided tours. Carol had the best tour guide in town. It has been a very enjoyable day and we head back to the ship for some lunch and, if I know Carol, an afternoon nap. Tomorrow, another country. 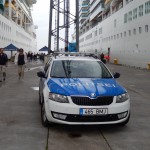 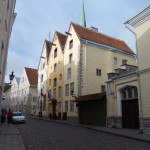 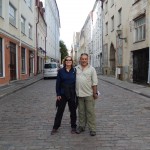 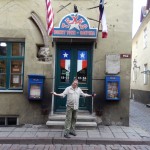 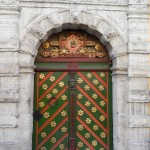 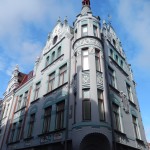 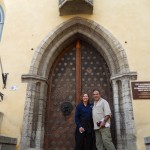 By the Great Guild 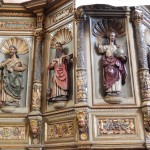 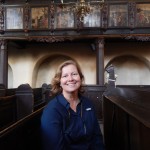 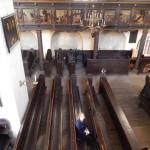 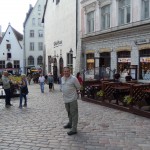 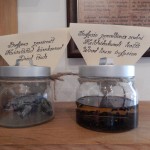 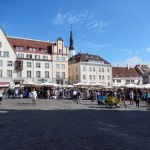 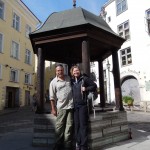 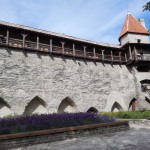 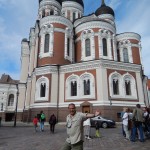 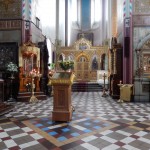 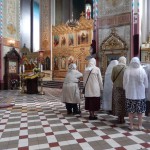 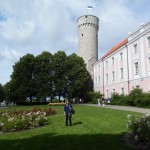 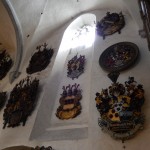 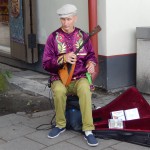 Asleep on the Job 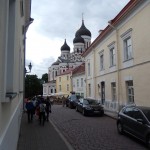 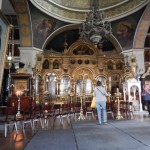 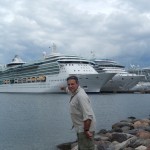 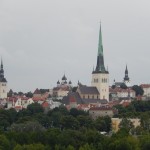