Helsinki.
We finally slept in a bit. We did not get up until 0945. We really like the inside cabins because they are pitch black at night. It really helps the sleep cycle,me specially with the amount of daylight here. Last night, I took a sunset picture at 10:00 P.M. We go to the Windjammer Lounge for breakfast and then back to the room to get ready for Helsinki, Finland. The maps I have are not very specific on the edge where the cruise ships dock. I did not know ahead of time which of the many docks we would be at. We could take a shuttle to town for 7E each but that would defeat the lose weight in Europe plan that I am trying. When we get off the ship and pass the long line for the shuttle, there is a tent set up with vendors and such. One of them has a free map of Helsinki and I grab it. It has the streets around the docks as well as the town. Just outside the port, there is a map showing where we are and the pedestrian route to town. I now feel good about navigating and we start our journey. We pass a ton of construction in the area. Apartments are going up everywhere, and the construction, walls, floors,ceiling is all concrete. As we hit the long street to the center of town, it starts to rain. We put our rain jackets on which keep us dry, at least until I start to sweat. Now the outside and the inside of the jacket are wet. As we finally reach the main dock and market square in the city, the rain stops. We check out the outdoor market selling food, fruits, and local goods. We notice the fur coats and hats which probably would not go over well in the USA. There are reindeer antler bottle openers, cheese slicers, knives and various other items.
We see a church up a hill a few blocks up so we head towards it. Nice views from the hill the church sits on, but the church itself is closed. That’s when I realize it is the Uspenski Church. 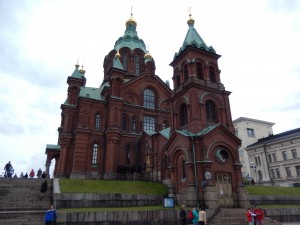 It is Russian Orthodox with its distinctive onion dome, and I have it marked as closed on Mondays. And so it is. From here, we have a short walk to Senate Square and the Lutheran Church. We pass the presidential palace with one guard and it is not even a little bit lavish. Much different than the opulent Stockholm Palaces. We reach Senate Square which is in front of the Lutheran Church. We found where the shuttle bus as well as half the tour buses in Helsinki are. We labor up a series of steep steps and enter the church. 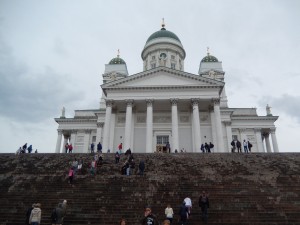 The Lutherans were not decorators. It is quite Spartan with white walls and domes, a small simple alter, and organ. The four corners of the central dome have statues of Martin Luther and the local Lutheran Leaders. That is all there is to it. They apparently liked to build their churches up high as from the top of the steps, you have a commanding view of the surrounding area.
From the church, we visit the free and small city museum. It has a few nice displays of local history but not much in the way of artifacts. We leave and head up the main shopping drag in town. Even though the city itself does not look very wealthy, all the rich and famous stores are here. Gucci, Prada, Vuitton, to name a few. We come to the train station and peek inside. Very eastern bloc with a large imposing concrete look. We stop at the Otto (ATM) to take out some Euros in case we need them here or in Estonia and Latvia. From the train station we walk to Temppeliaukio Church which is known as the Church in the rock. It was blasted out of solid granite in 1969 and has no decor, just simple crosses. It is capped by a copper an skylight dome which is a 13 mile long coil of copper ribbon. From less friendlier times, there is a 6000 person air raid shelter under the church.
This concludes our self guided walk of Helsinki and when we arrive back at the ship we have walked 9.7 miles. Other than the early morning rain it was a nice day. Helsinki was nice enough but in my opinion, there was not the special feeling that we had in Stockholm. None of the sights were overly impressive and is not a place we would return to. Tonight it is early to bed as we have a very early tour in St Petersburg, Russia tomorrow. 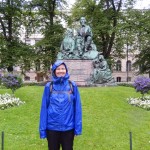 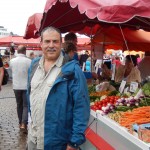 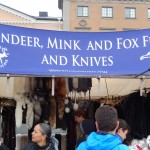 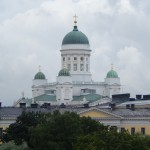 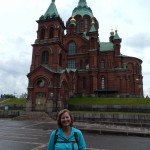 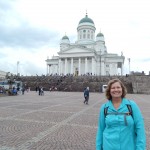 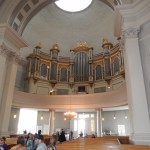 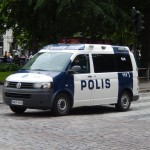 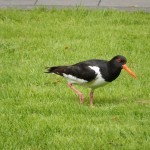 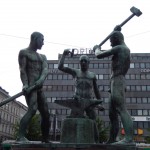 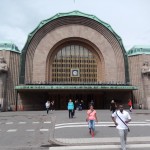 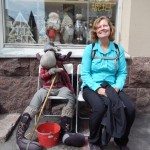 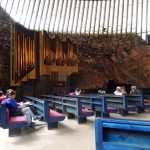 Church in the Rock 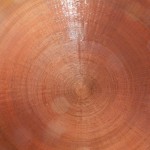 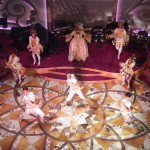 Back on the Ship 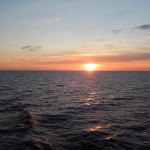