Carol’s 50th Is Not As Planned 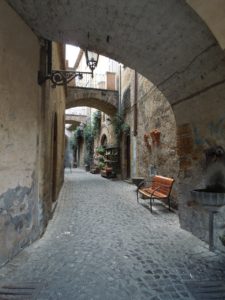 The Mean Streets of Orvieto

Happy Birthday to My Beautiful Wife. Should I tell her age, she is    Years young and can fill this in if she wants when she reads this. I love you honey and am glad we are sharing this amazing adventure.
Our train does not leave until 1115 so we can sleep in a little before breakfast. After breakfast, while Carol packs, I take a walk to see if the buses are running. One shows up at the stop, so I go to buy a ticket at the Tabacchi store. They tell me they do not sell tickets and I need to go to the newsstand in the Piazza. I go there and the guy is really rude and just says finis. I say no capisco, you do not sell tickets and he just says finito. I do not get it but leave and walk all the way up to the main station above us and ask a guy who points me to a bar. They sell me two tickets so that problem is solved. There is just no rhyme or reason as to who sells tickets which just adds to the charm and of course the challenge of bus travel here.
We check out, say good bye to Daniele, and go wait for the bus. It arrives which makes us happy and while we are riding down, there is a sign hanging in the bus, saying the strike today from 0600-0900, and 1200-1500, so we feel lucky at 1020 to have a bus as the strike info on line said it was all day. Zerilli Buona Fortuna (good luck) is holding out or they did not want Carol to walk on her birthday.
We catch the train to Orvieto, well actually to Terontola/Cortona where we catch the train to Orvieto. I believe Cortona is the town where Francis Mayes lived and wrote about, in Under the Tuscan Sun. This is probably why the town is on the station name even though it is in the hills and Terontola is where the station is. The ride to Orvieto is nice as we watch the countryside change. We can see the town up on the hill quite a ways before we reach the station.
We arrive at 1330 and I go to the ticket booth to buy our ticket to Naples in three days. We get the most economical ticket available. For this longer haul which is not on a regional train, it pays to buy ahead as the faster trains work like airlines. They sell so many seats at lower prices, than it goes to the next tier and so on. This saves us about 50 Euros from the base fare. Next, I go to the bar and buy the combo card for all the sights in Orvieto which is also good on the Funicular we are taking up the hill to the town above. There is a line for the funicular and we just squeeze on a little before 1400, not realizing how lucky we are again. We find out later that the funicular is part of the bus union and they started their strike here at 1400 and closed it down. We are happy that we timed everything accidentally well. It is funny how each town decided when they would strike even though it was all part of the same union and at least these two towns did not do the all day strike as advertised. It is just the Italian way!

At the top of the funicular, we walk to our BNB and find it without any problems. Check in is good, packs are dropped off in the room and out we go for food and a few sights. Lunch for today is the overflowing and cheap Kebap. It is by far the most stuffed one we have gotten and is very good. Watching the Kebap guy make it went like this. Carve all the Kebap meat (chicken) off the spit. Go heat and cut the Kebap pita like holder. Start with Kebap meat, add spicy sauce, lettuce, tomatoes, onion, French fries( a new twist), cabbage, and yogurt sauce. Now add more Kebap meat until it can hold no more, add some more and put it on a plate. Repeat for Kebap number two. We eat at a small table on the street, oh so yummy is this treat! 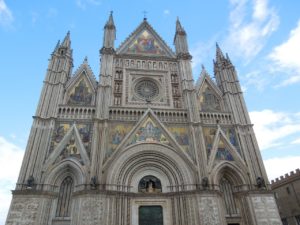 Very full, we walk over to the main plaza and get our first view of the beautiful Duomo here. The four marble pillars contain scenes from Genesis, Old Testament, New Testament, and Revelation. There are bronze symbols of the evangelists, angel (Matthew), lion(Mark – we remember Venice), eagle(John), and ox(Luke). There are also mosaics of Mary and the whole front facade is stunning. 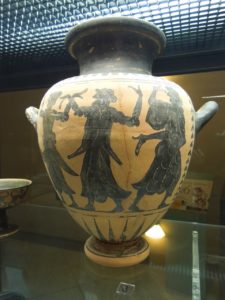 We decide to see some museums also in the Piazza before we go in the church as they close earlier. The Museo Claudio Faina is first and has an extensive Etruscan collection. The artifacts are amazing with English descriptions in each room of some of the items. We are once again amazed at how advanced this culture was for having lived here 1000 years before the Romans conquered them and 1500 years before Christ. There is also an extensive Roman coin collection here held in plexiglass shelves which you can rotate to see both sides of the coin. It is a pretty cool setup. We enjoy this museum and then go across the Piazza to the small Archeological Museum. It has four rooms of more Etruscan artifacts and ancient Etruscan wall paintings that were removed from a nearby tomb. While our Anasazi were putting handprints on walls, and depicting primitive hunting scenes or animal art, the Etruscan painted banquet scenes in a pretty advanced way 2000 years before the Anasazi. It is pretty incredible to me. 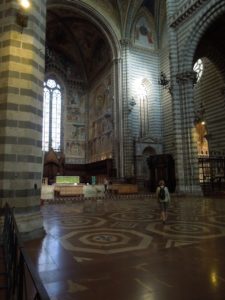 The other museum we wanted to see is closed, so we head into the Duomo. The inside looks large because it was designed to. The church is wider at the back and narrower at the front so it looks longer than it is when you walk in, optical illusion from the 1300s. It has alabaster windows and some incredible artwork, as well as an important relic. The chapel of the Corporal contains a blood stained cloth. A visiting priest from Prague passed through this area and had doubts that the communion bread could be turned into the body of Christ. While giving mass and holding the bread while blessing it, the bread started to bleed down his arms and onto a linen cloth, or corporal, on the alter. The cloth was brought here when Pope Urban IV visited and he proclaimed a new holiday known as Corpus Christ ( body of Christ) and had the church here built to display the relic. The relic is now above the alter but was kept in a beautiful reliquary also on display. Frescoes cover the walls and ceiling. 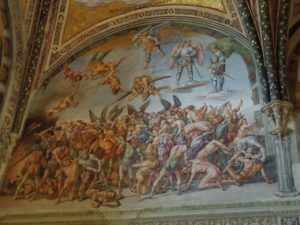 Ex Girlfriend With Demon in Hell

We also view a statue of the Pieta carved by local boy, Ippolito Scalza in 1579 from one piece of marble. The chapel of San Brizio on the right of the alter contains frescos by Luca Signorelli. They depict the Apocalypse through judgement day and took 5 years to complete. We take time to absorb the beauty and see the story unfold. In the Last Judgement panel on going to Hell, one flying demon near the center is turning to his frightened female passenger to let her know what is in store. This female was the artists girlfriend who had betrayed him so he put her here in eternity for all to see. Much more lasting than a posting on Facebook! We really enjoyed this church and it is incredible for being in such a small town. We walk back to our room because Carol is not feeling well and wants to rest. 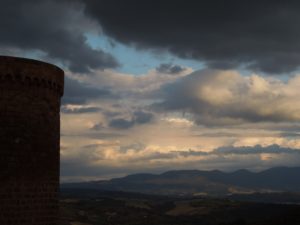 While she rests up, I take a walk to find out about a bus to Civita Di Bagnoregio, which is on our agenda for tomorrow. By the bus station at the top of the funicular, I find a schedule but not where the bus stop is exactly. As the strike is on, there is no one to ask so I walk around a nearby park which has fortress towers and the old wall of the city. The mix of clouds and blue sky make for a cool view and I snap a few photos. On the walk back, I stop in the Tabacchi shop to buy bus tickets as the bus tomorrow leaves before they open. Unfortunately, Carol is still feeling a bit under the weather so we just have some pasta and she has water with her meal. Not a great way to celebrate her 50th, we return to the room so she can rest. I will make it up to her another evening. Happy 50th Honey!
CNC
While my birthday girl is resting, I think and reflect on our journey.
“Having a wife who not only is understanding of my wanderlust, but willingly and joyfully shares in it, is a great feeling”- Charlie 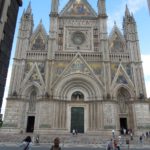 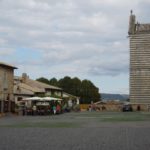 Part of the Main Square 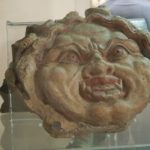 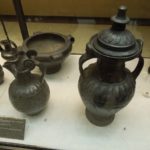 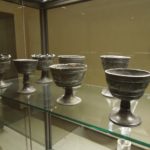 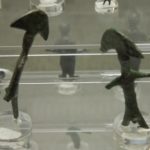 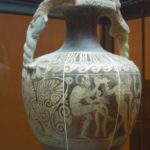 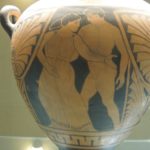 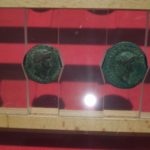 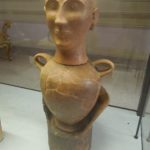 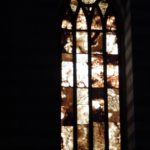 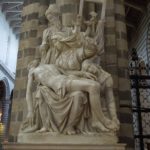 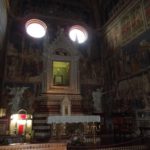 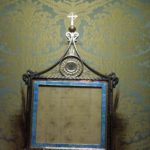 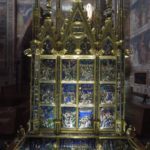 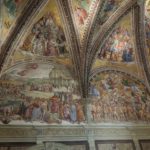 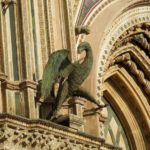 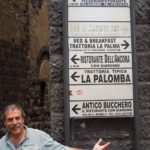 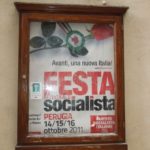 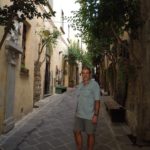 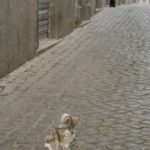 The Cats and Dogs Have Taken Over 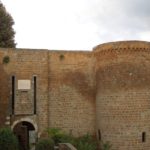 Fortress on the Wall