May 31, 2019Written by Charlie and Carol
Leave a Comment 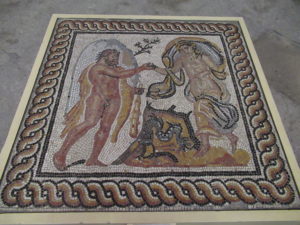 We decided to not do Arles. The train schedule changed from when we planned the day trip and the times now are not convenient for us. Instead we will do some of our planned activities of Saturday, today. The good thing is that we got to sleep in today,matching up on some much needed rest. We have another nice cooked breakfast, courtesy of my lovely wife. We are not even out the door until after 1130, a very late start for us. We walk to the Lapadaire Museum, which houses Roman and other artifacts found in the area. The city museums are all free so why not check them out. This museum is a hodgepodge of mosaics, statues, tombstones, and pottery. Everything is in French so it makes it difficult to ascertain the history other than some of the names and the date they believe it was from. We spend maybe a half hour walking around before heading out. 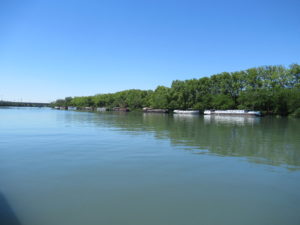 We decide to go take the shuttle boat to Ile de Barthelasse and meander along the waterfront to get there. We see boats docked along the banks and pass one of two river cruises that are in town for the day. We keep saying we want to do one of these so maybe one year we will work them in. 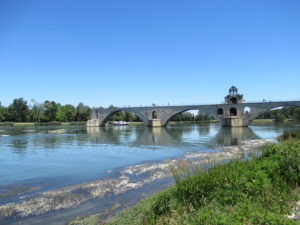 We approach the Pont D’Avignon bridge so now you can have the rest of the story. There is a French nursery rhyme about this bridge which makes it more famous than it probably deserves to be. They charge 3 Euros each to walk on the bridge which no longer crosses the river and suckers, I mean people flock to do it. The bridge itself was built from 1171 to 1185, and was one of only three bridges that crossed the Rhone River in those medieval times. It was important to pilgrims merchants, and of course armies. It was damaged by floods and rebuilt several times. 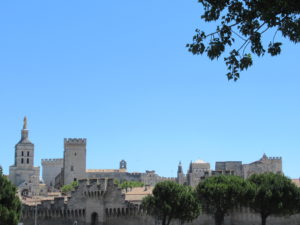 In 1668, a disastrous icy flood knocked it out and the town decided not to rebuild it and for more than a century there was no bridge across the Rhone here. Only four arches survive today, while the original bridge had twenty two and was 3,000 foot long. I get a nice shot from our shoreline perch before moving past it to the boat dock. Unfortunately, when we get there, we find that they shut down for lunch and we have an hour and fifteen minutes to wait until it operates again at 1400. We decide to hang out on the shady bench nearby and watch the sights along the river. 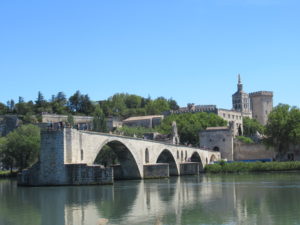 At 1400, we board the boat for the 5 minute ride across the river. Once we are out of the shade we realize how hot it has gotten. We walk along the shore getting some nice pictures of the bridge and the palace and old town. 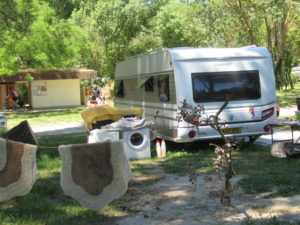 There is a campground on the other side of the path that we are walking and I peek in to see what kind of Rv’s they have here. I see what can only be described as French redneck campers who seem to have brought all the comforts of home with them including a washer and dryer that they have hooked up outside their camper. Maybe it is the French Beverly hillbillies come to swim in the cement pond of the campground. We turn around and walk the other way to see if we can find a supposed distiller on the island that makes pear and other fruit liquors. We do not succeed in finding it and the heat has drained us a bit so we decide to cross back to the town. One more short boat ride and a walk across town brings us to our apartment. A little relaxing and a pre dinner happy hour fills up the rest of the afternoon.                                                                                                  Tonight, we have reservations at the number one restaurant in town, La Cuisine du Dimanche. Carol has already informed me that she is getting duck breast and will not be sharing. I guess that is the way it will be then. We find our way to the restaurant and choose a table inside. The atmosphere is nice and romantic with curved stone walls and ceiling like a wine cellar. We are getting a set menu with several choices for entree, plat, and dessert. A half liter of the house red wine should go well with our duck. The restaurant staff is made up of a husband and wife team. The husband is the chef and the wife is everything else, hostess, order taker, and waitress. Since we are not sharing, I order a mushroom soup, Carol gets an egg risotto as our entrees. The plats are two orders of the duck, and for dessert, Carol orders a creme brûlée and I get a meringue in vanilla sauce whose name is escaping me. Our orders taken, we enjoy each other’s company and the nice selection of American music that they have on. 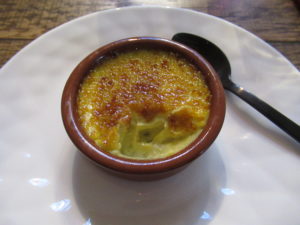 While waiting, the chef comes out with a free little starter. He tells us it is a duck foie creme brûlée. Carol says it looks great and he says that is only the beginning. Confidence of the man in charge. We dig in and it is incredible. I generally am not a big creme brûlée fan but this is really good. I can’t even begin to describe the joy that my taste buds are experiencing. 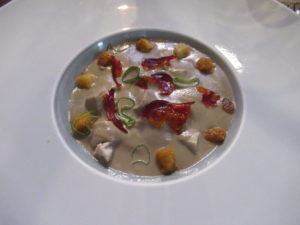 There is a nice time gap before our entrees come. My soup is also incredible, so much that when Carol tries it she says she should have got it, even with her general dislike of mushrooms. It is creamy, earthy, goodness mixed with bacon and croutons for a bit of crunch. Her egg and risotto dish is good as well but the soup steals the show here. 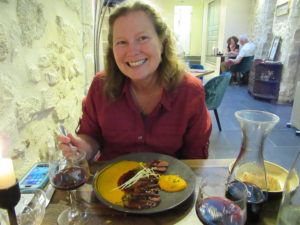 The main course of duck comes beautifully presented as a work of art. The tastes match the presentation. Truly divine. The puréed vegetable which we think may be squash is incredibly creamy with a slight sweetness cut by the cream. We later discover after talking to the chef that it was not squash but carrots. Not like any carrot dish we have had. I think he said he baked them with cream then whipped them. 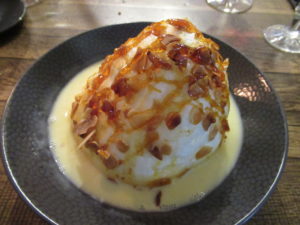 The last course is dessert and Carol regrets not getting what I got. It is more deliciousness. The caramelized bits on the meringue and the vanilla cream sauce are incredible both great by themselves but put them together and oh my my and ooh la la. 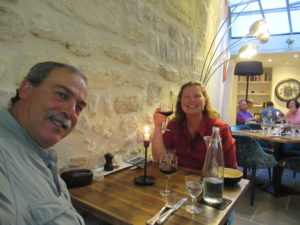 The chef comes out and spends time talking with us, a very nice touch. He looks young and I play the game of guess the chefs age, this time overestimating at 35 to 38. It turns out he is only 31. Wow. He tells us he trained in Lyon with one of The head chefs of a Paul Bocuse restaurant. Paul Bocuse was a famous chef whose reputation put Lyon on the map and many say it is a much better culinary city than Paris. The market hall in Lyon is named after him. 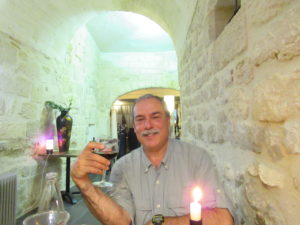 I am amazed at how someone so young can be this talented in the culinary art. We sit, enjoy the rest of our wine and then say our au revoirs. This ranks up there as one of the best meals we have had on the trip. Feeling satisfied and happy with our meal and the fact that tomorrow should be a relaxing day for us. 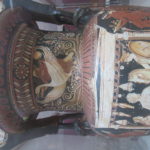 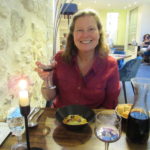 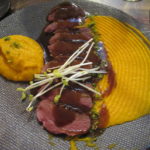 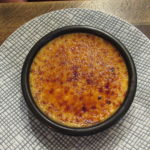